LOG IN
Forums
Business
Back
Lifestyle
Back
Social Impact
Back

Vidita Singh, is one of the first automotive artists in India, brings to life these fine automobiles in elements that are uniquely India. She was brought up in a family of automotive enthusiasts, who are passionate about cars – her father H.H. Rana Manvendra Singh Barwani, a pioneer in the field of automotive restoration, he is a published Automotive historian, and is the driving force behind the Cartier Concours d’Elegance – it was inevitable that automobiles would be reflected in her art. Vidita feels a passionate need to preserve India’s automotive history and tradition. And, she does this through her canvases.

Interested in art from an early age, her paintings themed on cars, have hoisted her to the national stage after she completed college and finally immersed herself into painting. Vidita has managed to portray automobiles and the special relation automobiles had with India in a manner that has now earned her international acclaim. Bringing out the novelty automobiles were in the bygone era, and the artistic and mechanical masterpieces they are today in her paintings are her passion.
Vidita’s work has earned her credit, so much so, that she has been featured on T.V. shows like BBC’s “Wheels”, NDTV India’s “Raftaar”. Podcasts like Cars Yeah! and Wrench Nation TV in the U.S, She has also been featured in National Daily’s, Automotive and lifestyle magazines such as The Telegraph, The Hindu, The Daily Guardian, Hello Magazine India, BBC Top Gear, Auto India, Femina India, Motoring Overdrive, Auto Motor & Sport, Better Homes amongst others.
Vidita was commissioned to make a painting for Ford Motor’s Centenary Celebrations, which now hangs in the office of the Managing Director of the Ford Motor Company, India. She was also commissioned to create a painting for Hyundai Motor Company, India which graces their corporate office.
An invited member of the American website AutomotiveArtist.com, Vidita has also been featured as an ‘Upcoming Automotive Artist’ in the Dutch website Carartspot.com. And has had the honor of being the guest exhibiting artist at the Automotive Fine Arts Society Exhibition at Pebble Beach Concours, California in 2018.
Vidita has had solo exhibitions in New Delhi, Mumbai, Hyderabad, Hong Kong and has been part of several exhibitions including the Cartier Concours d’Elegance as well as Pebble Beach Concours. Her work has been auctioned by Christie’s at Royal Bridges art convergence held in Dubai, apart from being part of their Google arts and culture online exhibit. 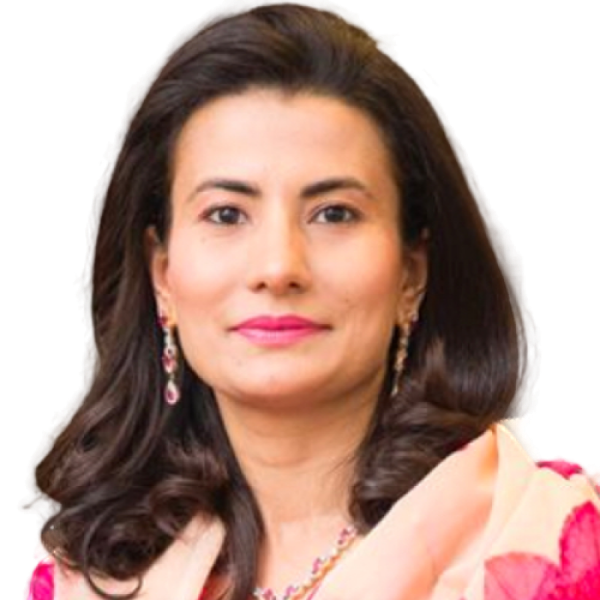 Oil Painting of the elusive Rolls Royce once owned by the Maharaja of Kashmir driving along a mountain road with the elusive snow leopard looking in amazement at the car. More Info 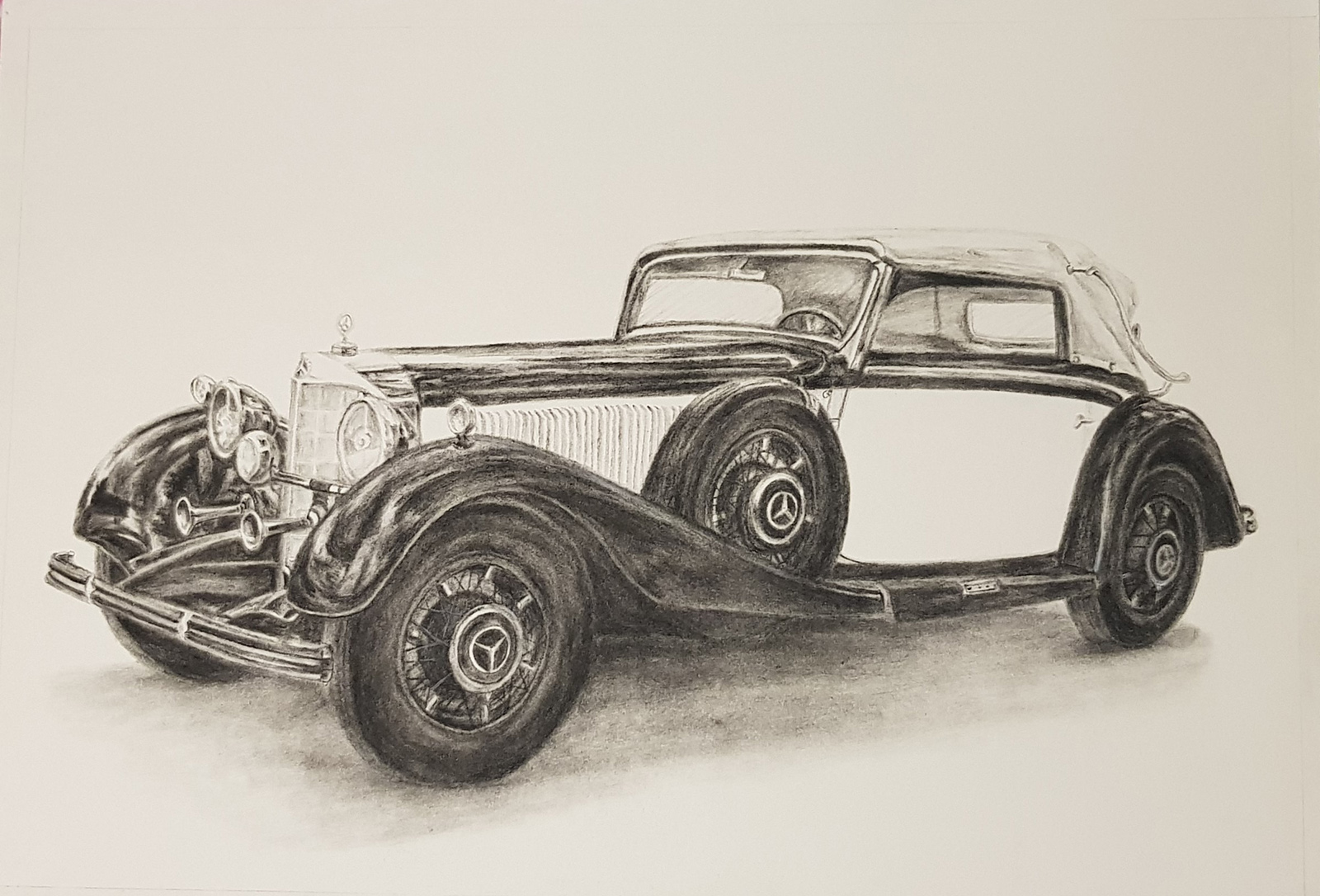 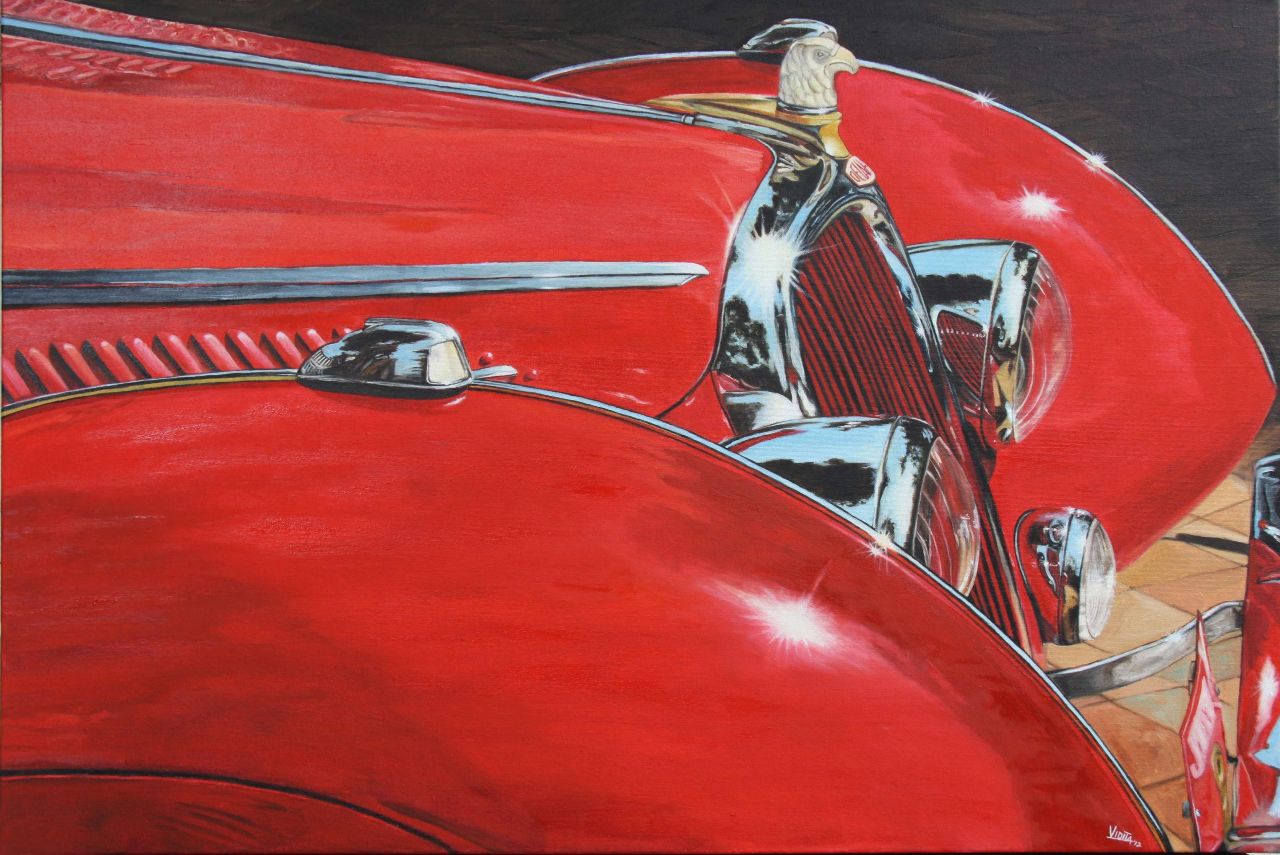 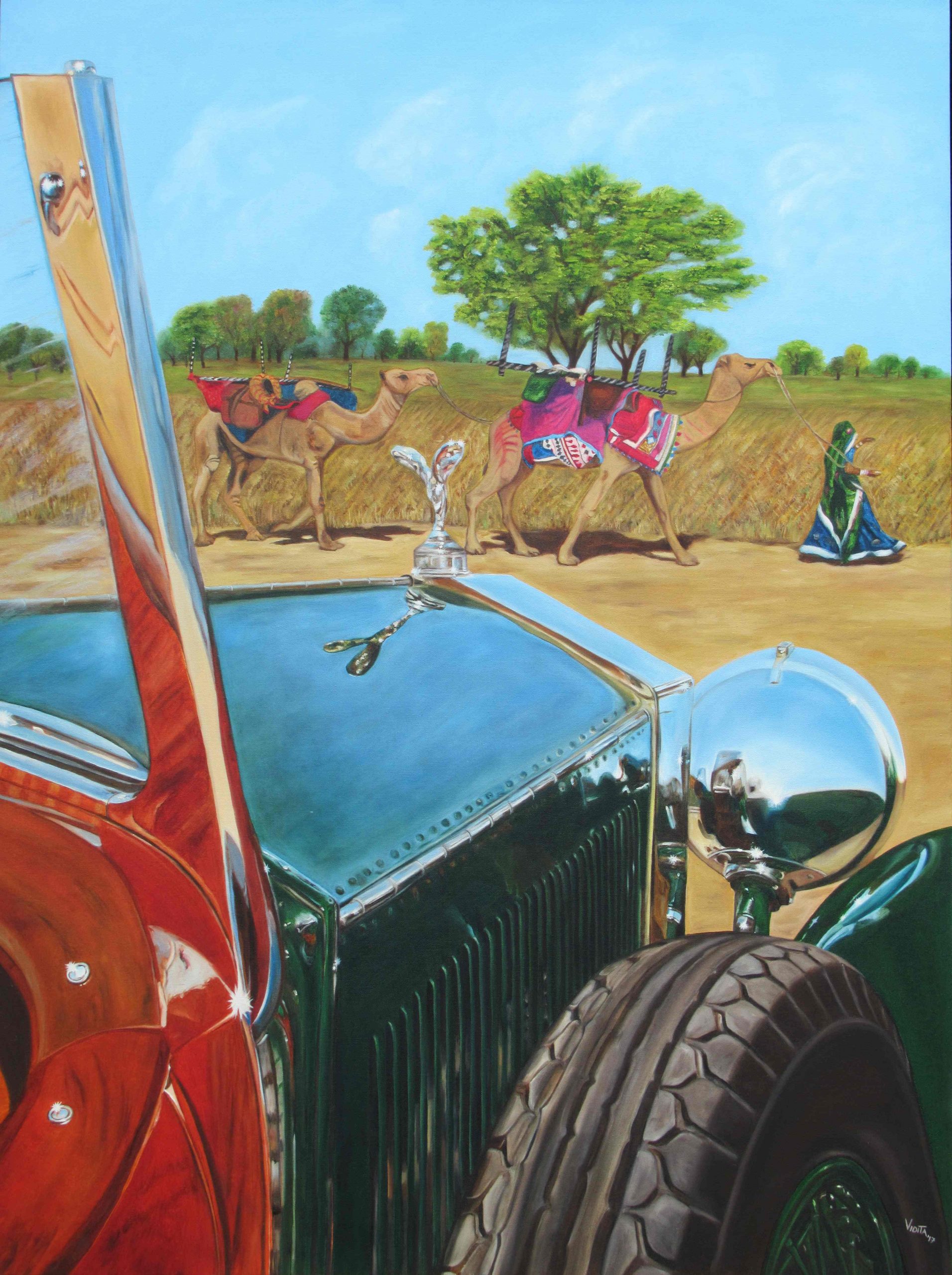 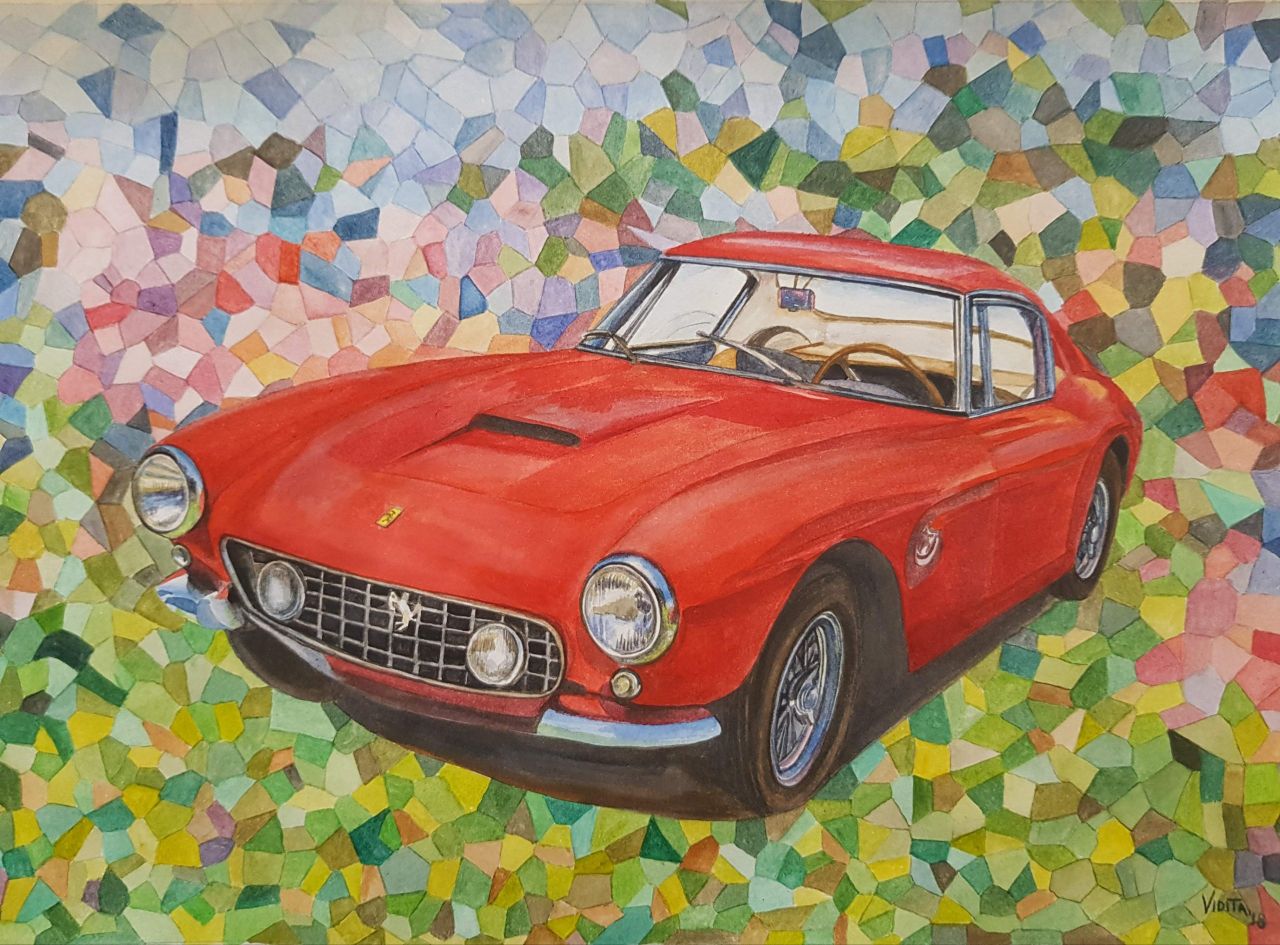 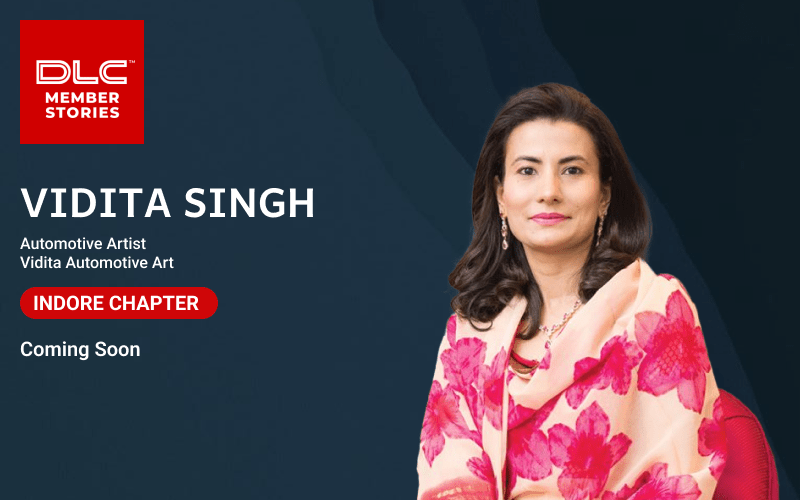 How passion for Vintage Cars inspired a princess to paint breathtaking automotive art.

Oil Painting of the elusive Rolls Royce once owned by the Maharaja of Kashmir driving along a mountain road with the elusive snow leopard looking in amazement at the car.

Has always been an indispensable part of royal folklore in India. Taking this tradition a notch higher is Vidita Singh Barwani from the royal family of Barwani in Madhya Pradesh Vidita has kept the legacy going as a much-sought after contemporary automotive artist. Her charcoal and water colours bring alive fine automobiles that found their way into India in the fifties, including Cadillacs, Ford Thunderbirds and Bentleys.